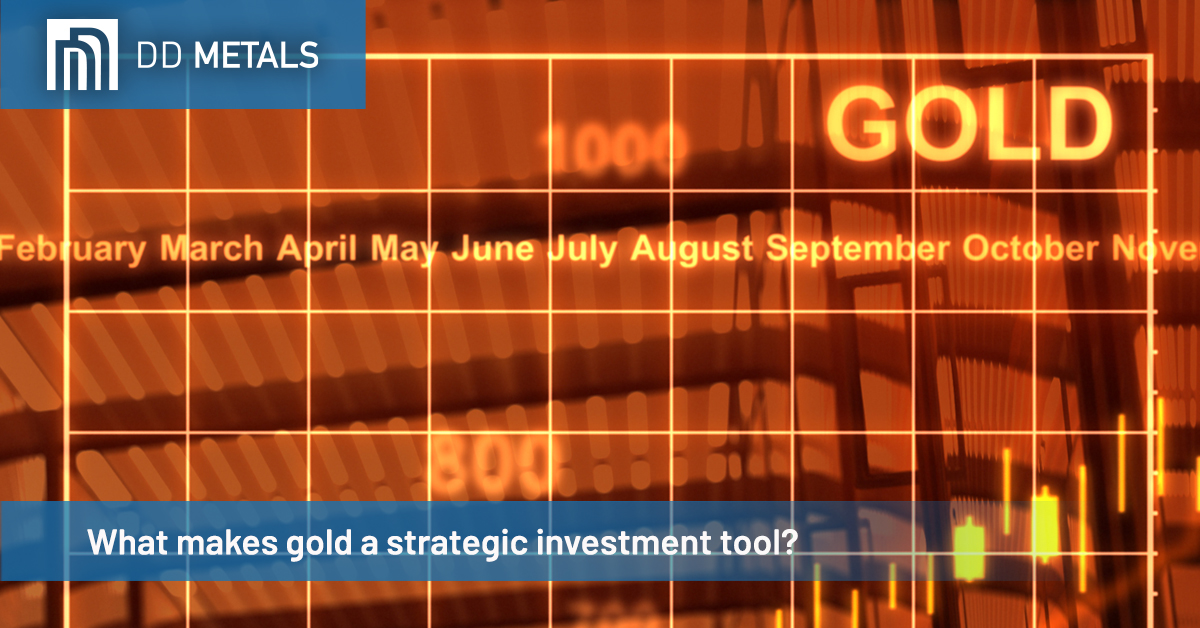 Gold benefits from diverse sources of demand: as an investment, a reserve asset, jewellery, and a technology component. It is highly liquid, no one’s liability, carries no credit risk, and is scarce, historically preserving its value over time.

2020 posed unprecedented challenges to investors as the first global pandemic in a century ravaged the world economically and socially.

COVID-19 significantly increased uncertainty by compounding existing risks and creating new ones. The rollout of new vaccines at the end of last year fuelled optimism that the worst was over. Yet the pandemic and the ensuing policy response from governments will likely have unintended consequences for, and create structural changes to, asset allocation strategies.

Global central banks have effectively taken interest rates to zero, driving nearly all sovereign debt to negative real yields. With less opportunity for yield across fixed income assets – especially those of shorter duration or higher quality – investors will likely continue to shift exposure to riskier assets. This has pushed many global stock markets to extreme levels on numerous valuation metrics and – importantly - has also served to increase the risk profile of most investment portfolios.

Additionally, many countries have made it clear they will continue to enact sizeable fiscal policy measures to tackle the economic impact of COVID-19, along with expanding budget deficits and balance sheets.

We believe these actions - in combination with the current environment have made gold increasingly relevant as a strategic asset. Not only could investors benefit from gold’s role as a diversifier amid ballooning budget deficits, inflationary pressures, and potential market corrections from already high equity valuations, but they may also see additional support as gold consumption will likely benefit from the nascent economic recovery, especially in emerging markets.

Gold was one of the best performing major assets of 2020 driven by a combination of:

Gold also had one of the lowest drawdowns during the year, thus helping investors limit losses and manage volatility risk in their portfolios
By early August, the LBMA Gold Price PM reached a historical high of US$2,067.15/oz as well as record highs in all other major currencies. While the gold price subsequently consolidated below its intra-year high, it remained comfortably above US$1,850/oz for most of Q3 and Q4, finishing the year at US$1,887.60/oz.

Interestingly, gold’s price performance in the second half of the year seemed to be linked more to physical investment demand – whether in the form of gold ETFs or bar and coins – rather than through the more speculative futures market. For example, COMEX net long positioning reached an all-time high of 1,209 tonnes (t) in Q1 but ended the year almost 30% below this level. We believe this was due to the dislocation that COMEX futures experienced in March relative to the spot gold price, making it more expensive to hold futures compared to other choices.

Investors’ preference for physical and physical-linked gold products last year further supports anecdotal evidence that, this time around, gold was used by many as a strategic asset rather than purely as a tactical play. 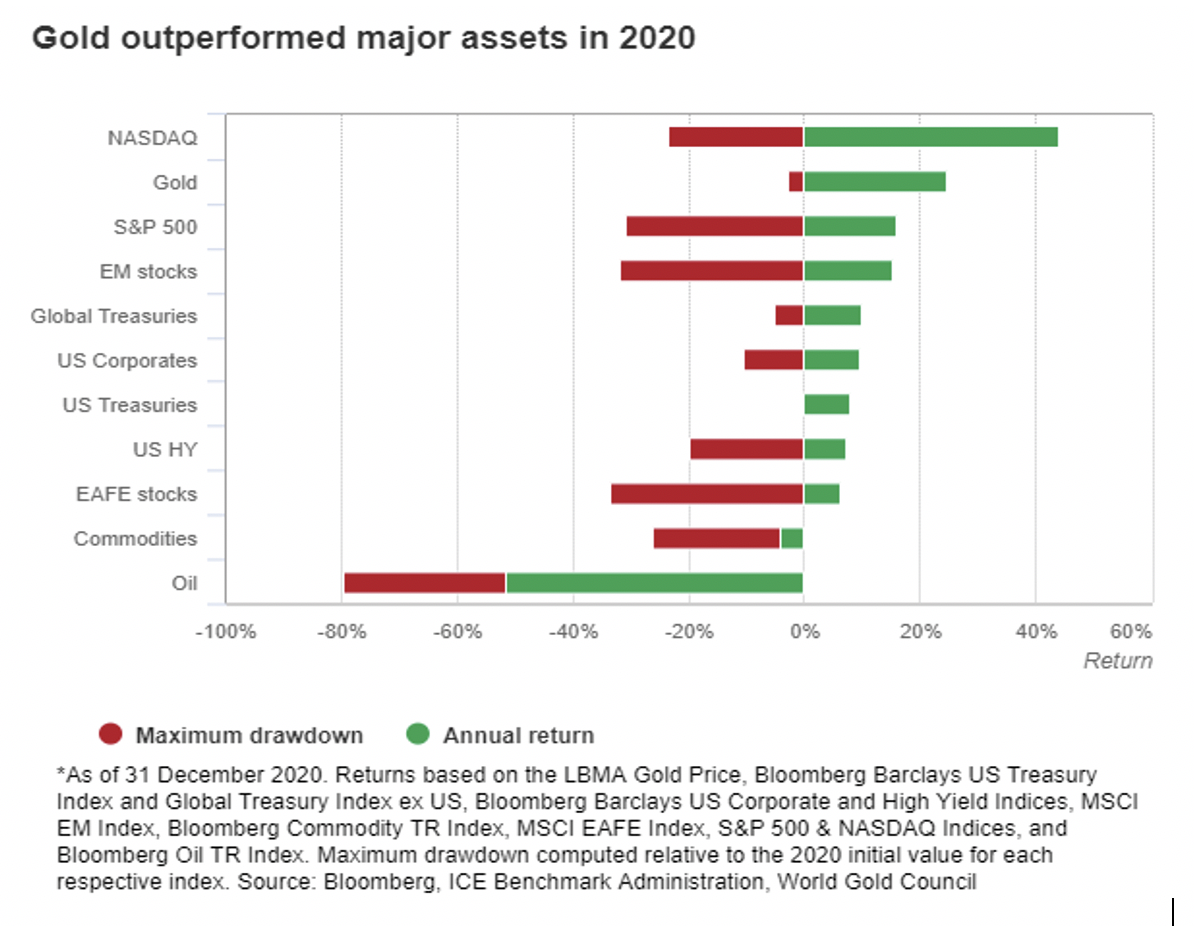 Gold investment to react to rates and inflation

Global stocks performed particularly well during November and December, with the MSCI All World Index increasing by almost 20% over the period. However, rising COVID-19 cases and a reportedly more infectious new variant of the virus created a renewed sense of caution. Yet, neither this nor the highly volatile US political events during the first week of 2021 have deterred investors from maintaining or expanding their exposure to risk assets.

Market surveys indicate that most economists expect growth to recover in 2021 from its dismal performance during 2020.3 And although global economic growth is likely to remain anaemic relative to its full potential for some time, gold’s more stable price performance since mid-August may foster buying opportunities for consumers.

The economic recovery may particularly realise in countries like China, which suffered heavy losses in early 2020 before the spread of the pandemic was controlled more effectively than in many western countries. Given the positive link between economic growth and Chinese demand, we believe that gold consumption in the region may continue to improve.

Similarly, the Indian gold market appears to be on a stronger footing. Initial data from the Dhanteras festival in November suggest that while jewellery demand was still below average, it had substantially recovered from the lows seen in Q2 of last year.

However, with the global economy operating well below potential and with gold prices at historical high levels, consumer demand may remain subdued in other regions.

Central bank demand not going away

After positive gold demand in H1, central bank demand became more variable in the second half of 2020, oscillating between monthly net purchases and net sales. This was a marked change from the consistent buying seen for many years, driven in part by the decision of the Central Bank of Russia to halt its buying program in April. Nonetheless, central banks are on course to finish 2020 as net purchasers (although well below the record levels of buying seen in both 2018 and 2019). And we don’t expect 2021 to be much different. There are good reasons why central banks continue to favour gold as part of their foreign reserves which, combined with the low interest rate environment, continue to make gold attractive.

Mine production likely to improve

Recovery in mine production is likely this year after the fall seen so far in 2020. Production interruptions peaked during the second quarter of last year and have since waned.

While there is still uncertainty about how 2021 may evolve, it seems very likely that mines will experience fewer stoppages as the world recovers from the pandemic. This would remove a headwind that companies experienced in 2020 but that is not commonly part of production drivers. Even if potential second waves impact producing countries, major companies have introduced protocols and procedures that should reduce the impact of stoppages compared to those seen in the early stages of the pandemic.

Putting it all together

The performance of gold responds to the interaction of various supply and demand sectors, which in turn are affected by the interaction of the four main drivers. In this context, we hope that the need for effective protections and the low rate environment will well support investment demand, but this could be greatly affected by risk perceptions associated with the pace and robustness of economic recovery.

Gold performance has been strong in recent decades, supported by key structural changes 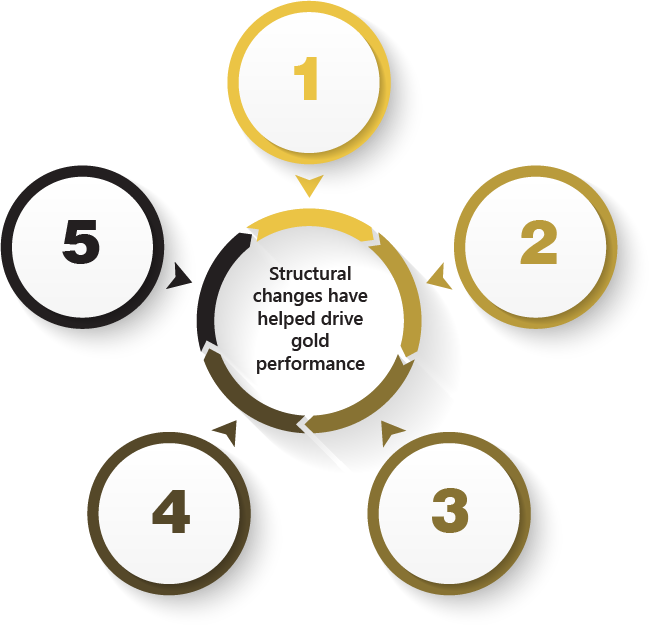 Average annual return of key global assets in US dollars* 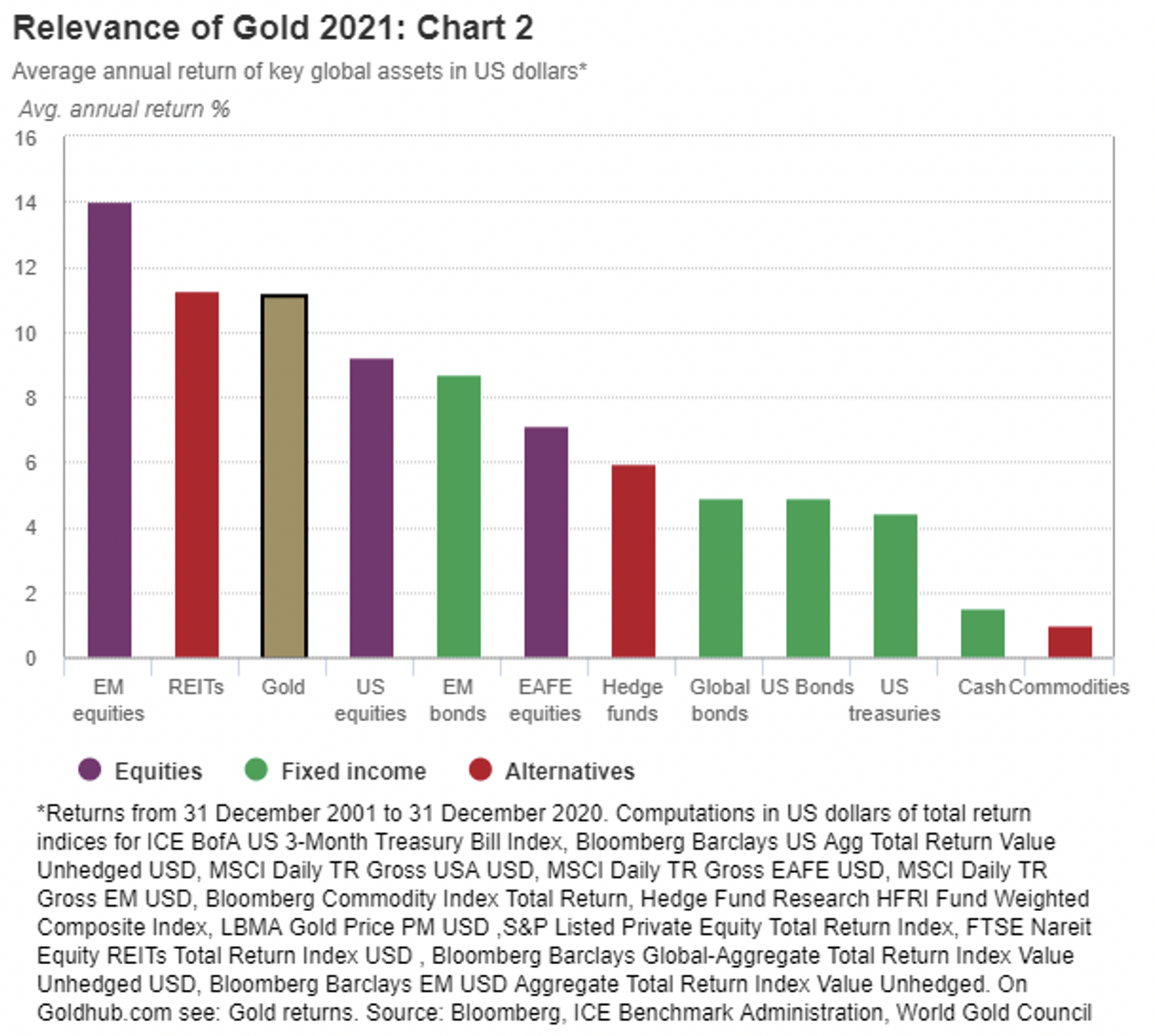 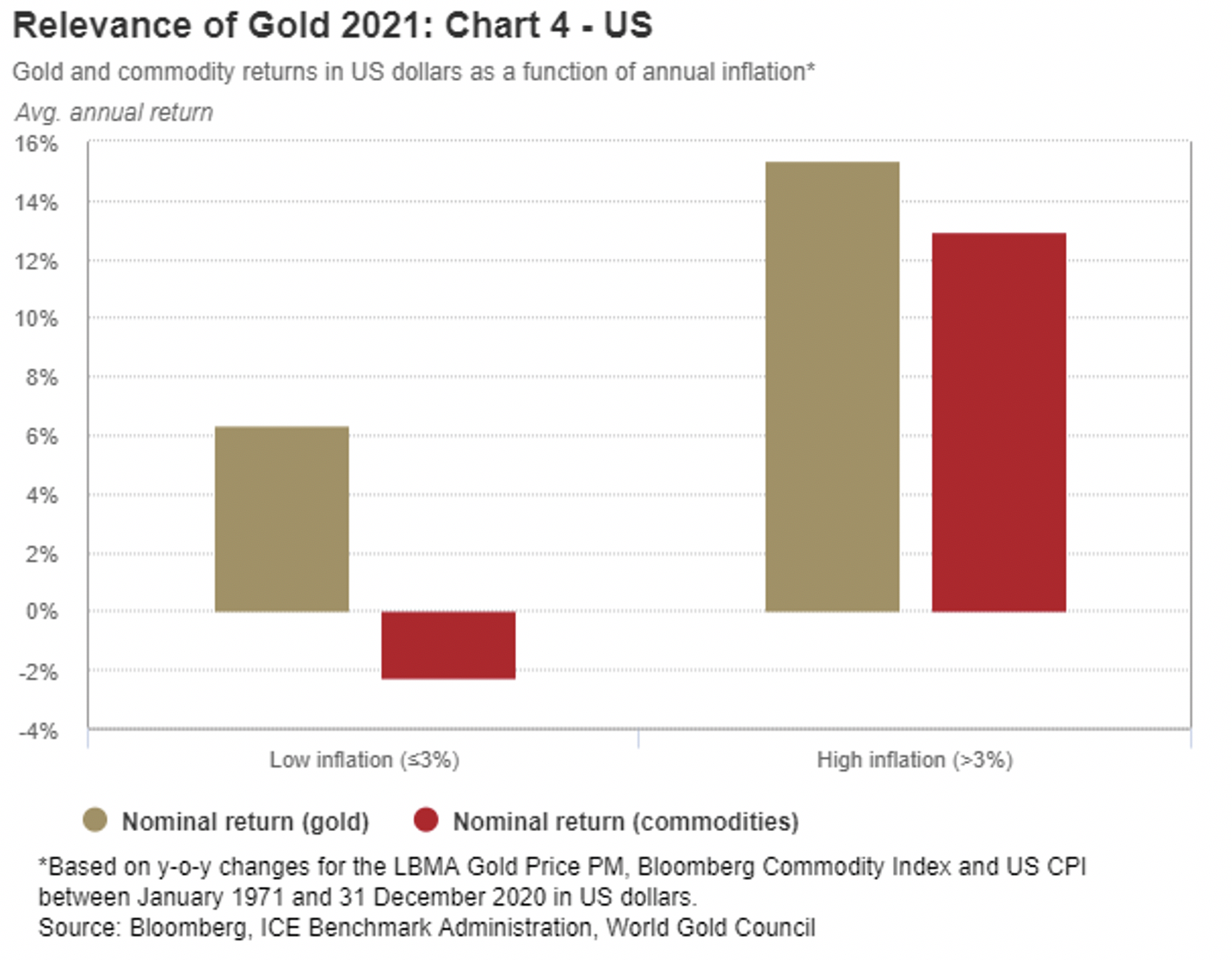 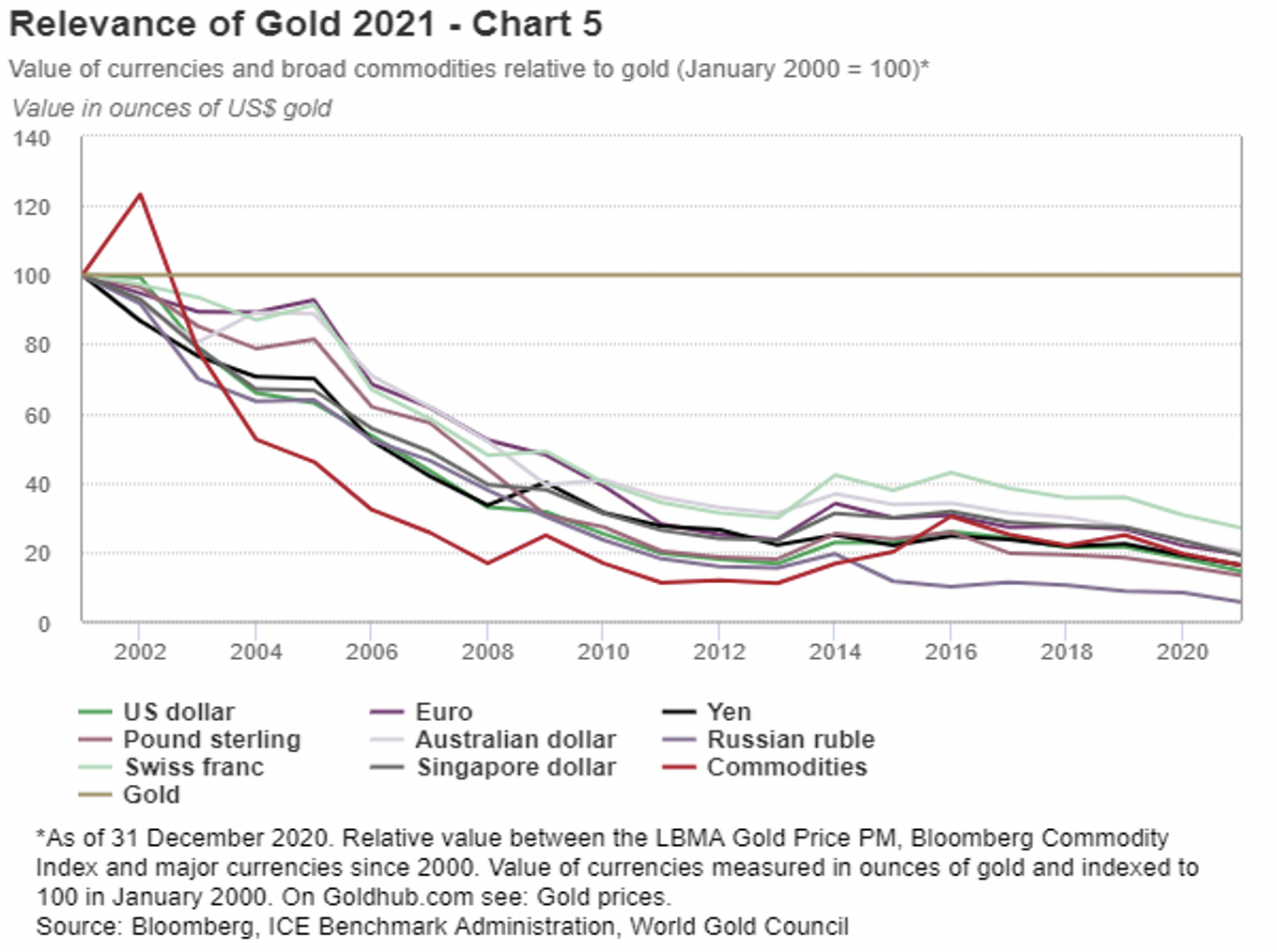 Investor demand has increased due to persistent low interest rates and concerns about the dollar's outlook affecting the perceived opportunity cost of holding gold.

Historically, major currencies have been pegged to gold. This changed in 1971 with the dissolution of the US gold standard and the eventual collapse of the Bretton Woods system. Since then, with a few exceptions, gold has significantly outpaced all major currencies and commodities as a medium of exchange (Chart 5). This performance was particularly evident right after the gold standard ended. The key factor behind this strong performance is that the supply growth of gold has changed very little over time - by around 1.4% per year over the past 20 years. 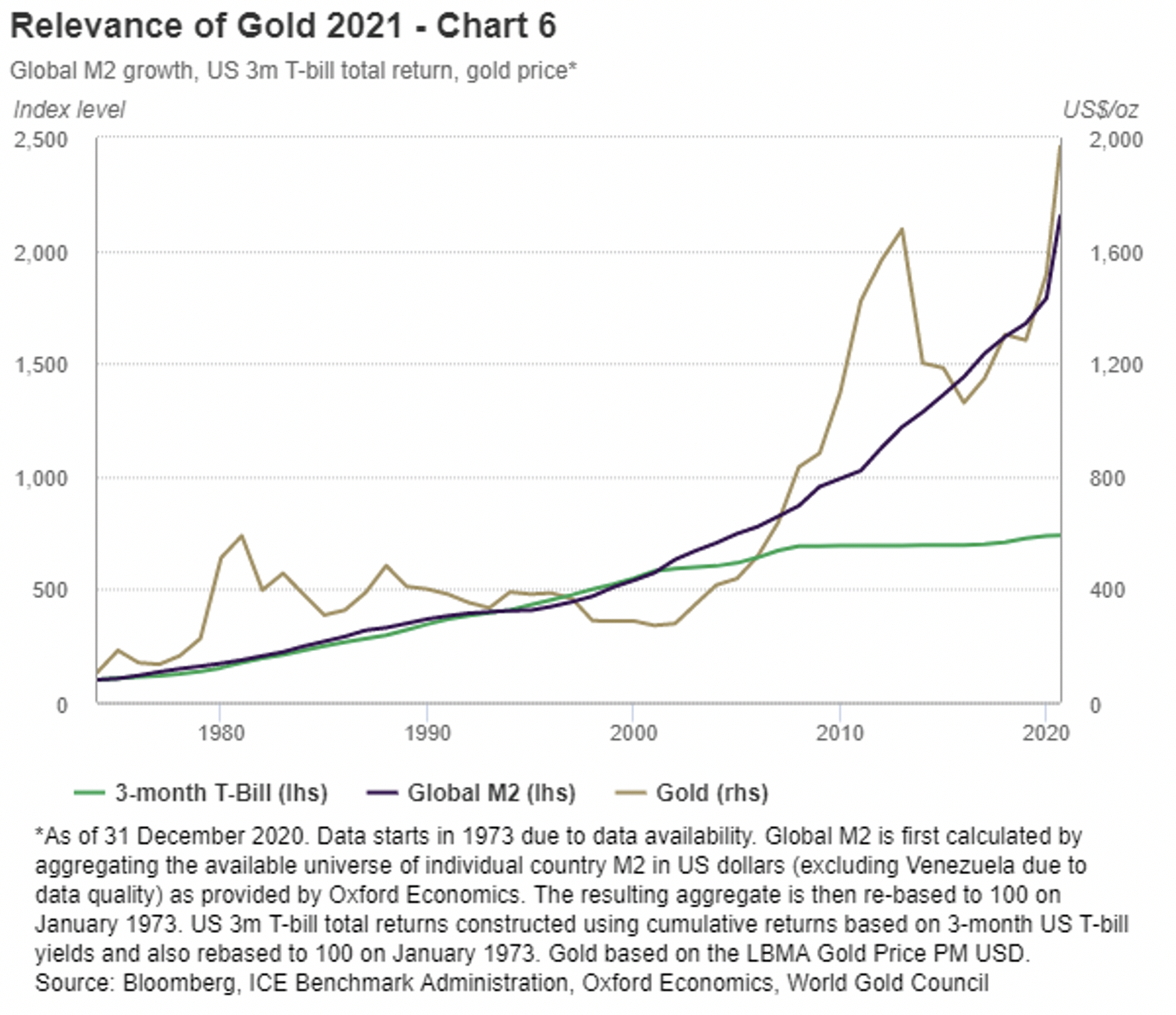 Correlation of US equities versus gold, commodities and US treasuries in various environments of US equity market performance since 1973* 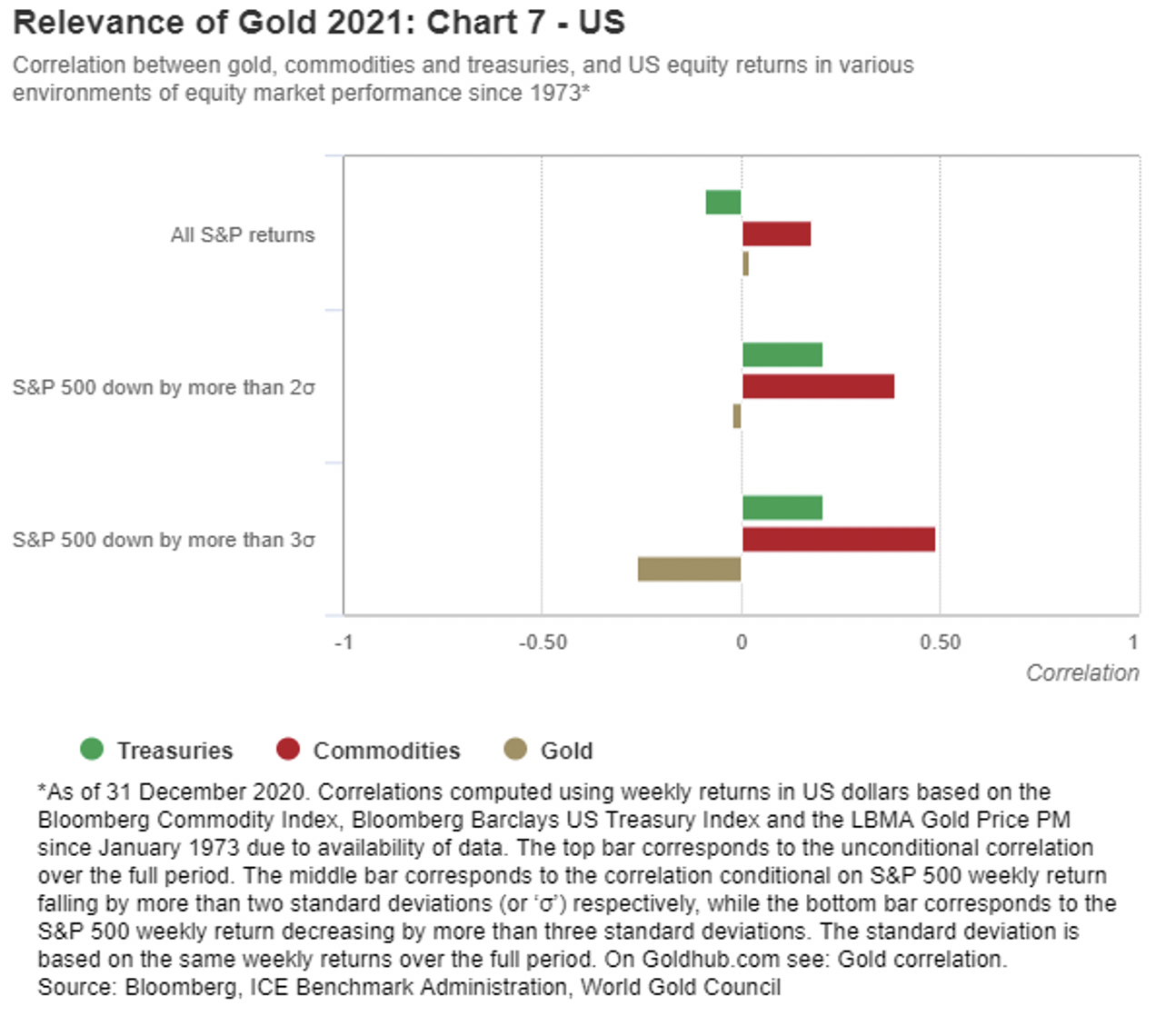 The gold price tends to increase in periods of systemic risk

US equities, treasuries and gold versus the VIX index* 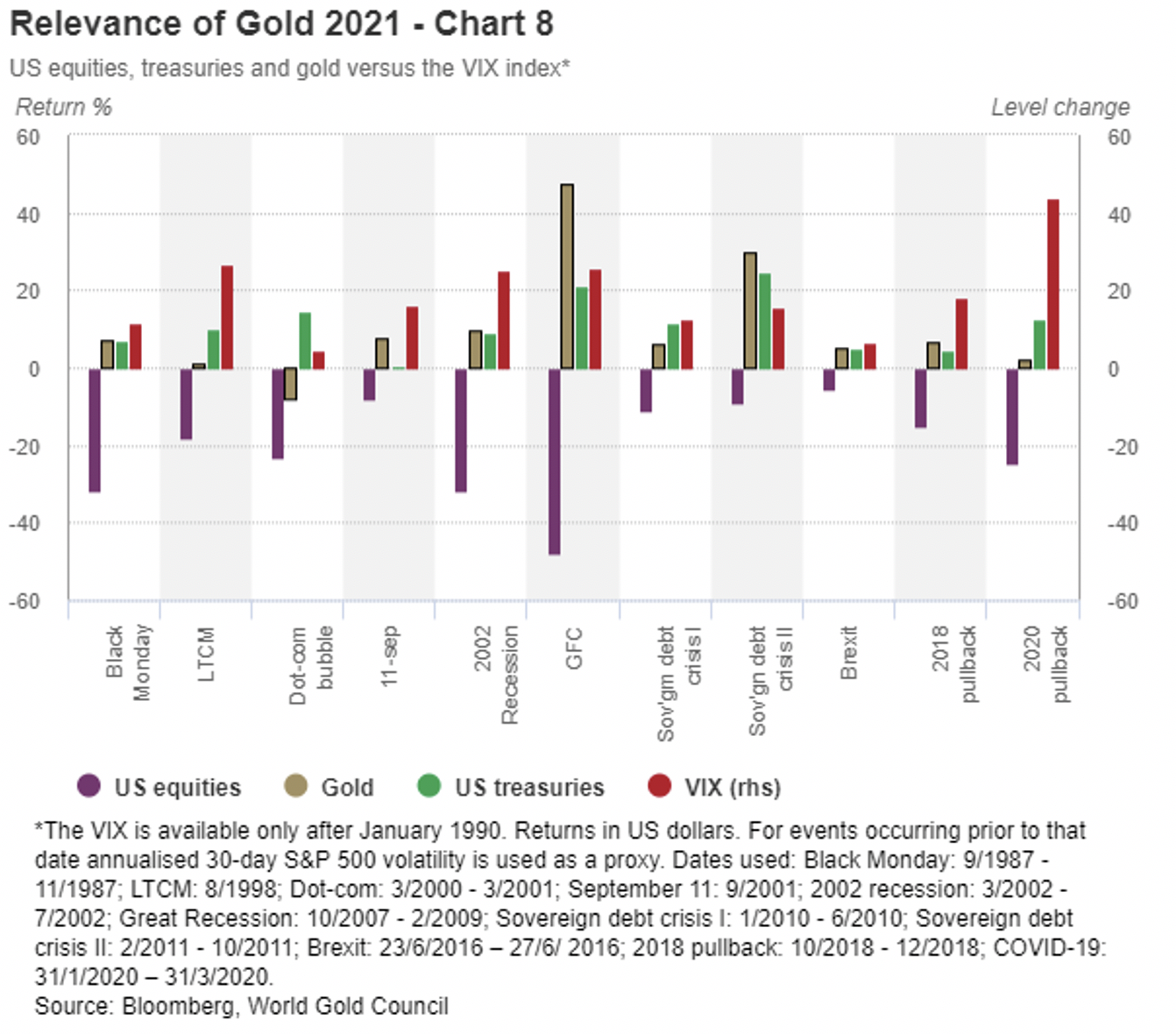 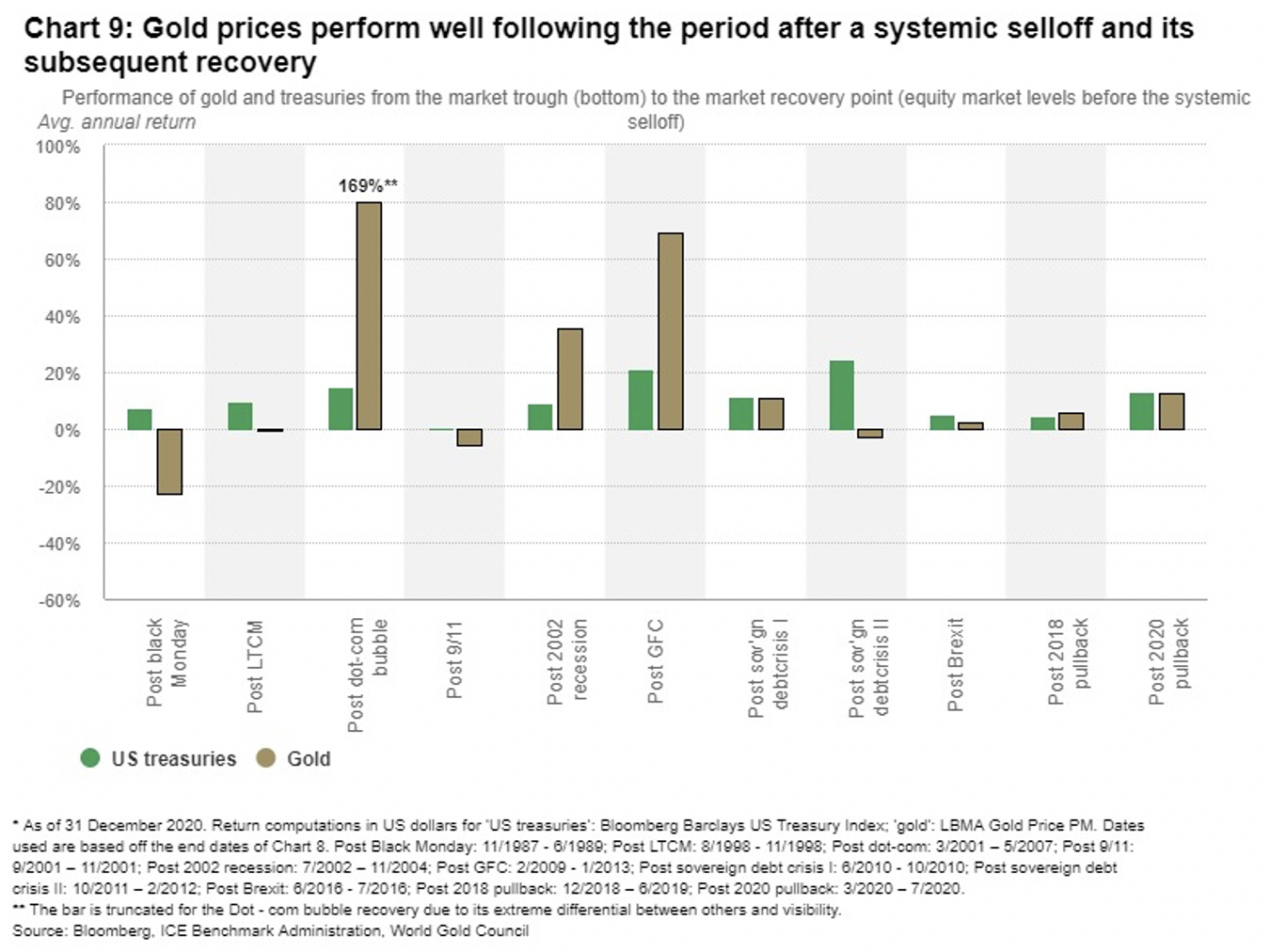 10- Gold trades more than many other major financial assets

12- Gold has been less volatile than many equity indices, alternatives and commodities because of its scale, liquidity and diverse sources of demand

Chart 13: Adding gold over the past decade would have increased risk-adjusted returns of a hypothetical US pension fund portfolio 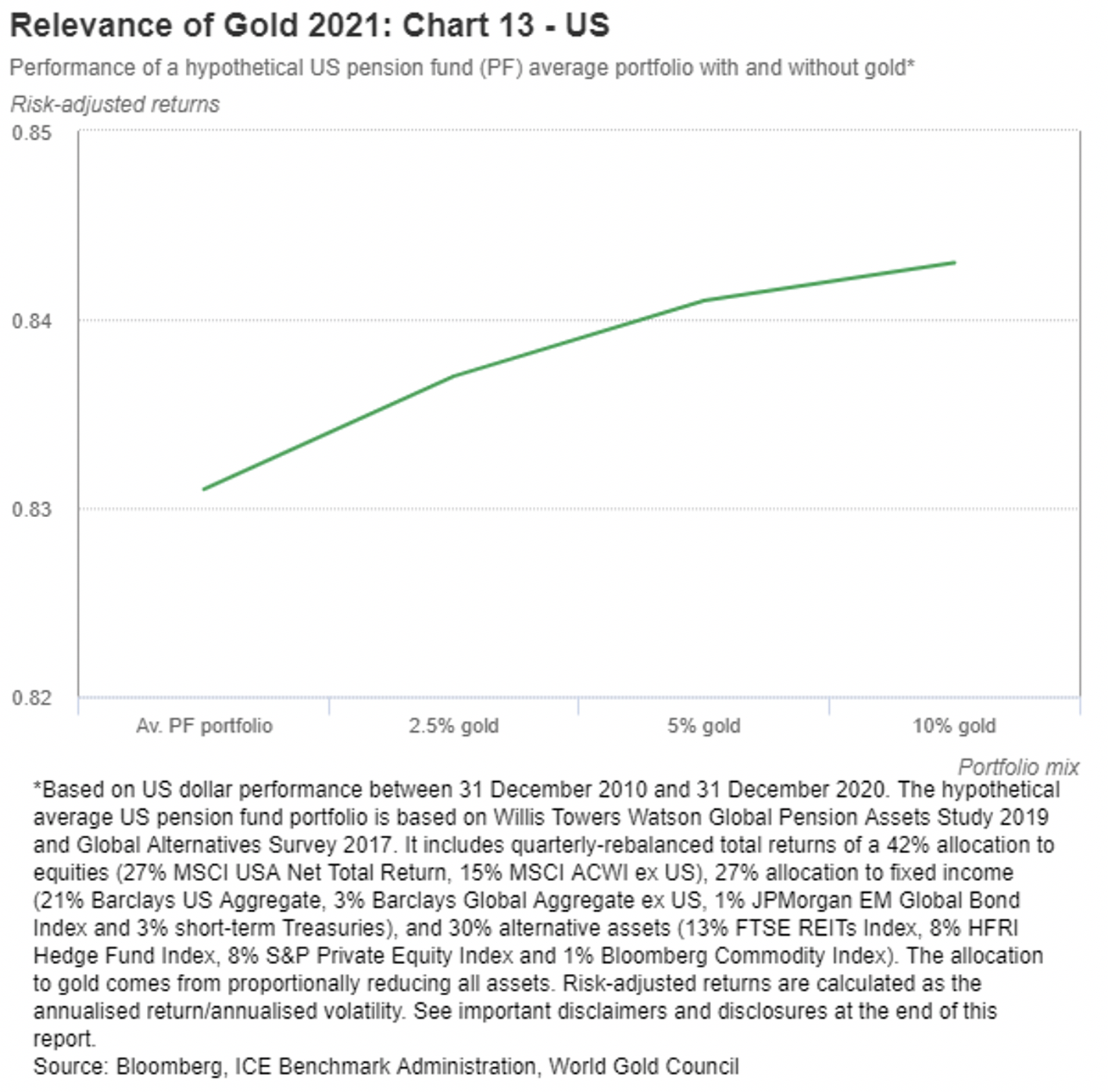 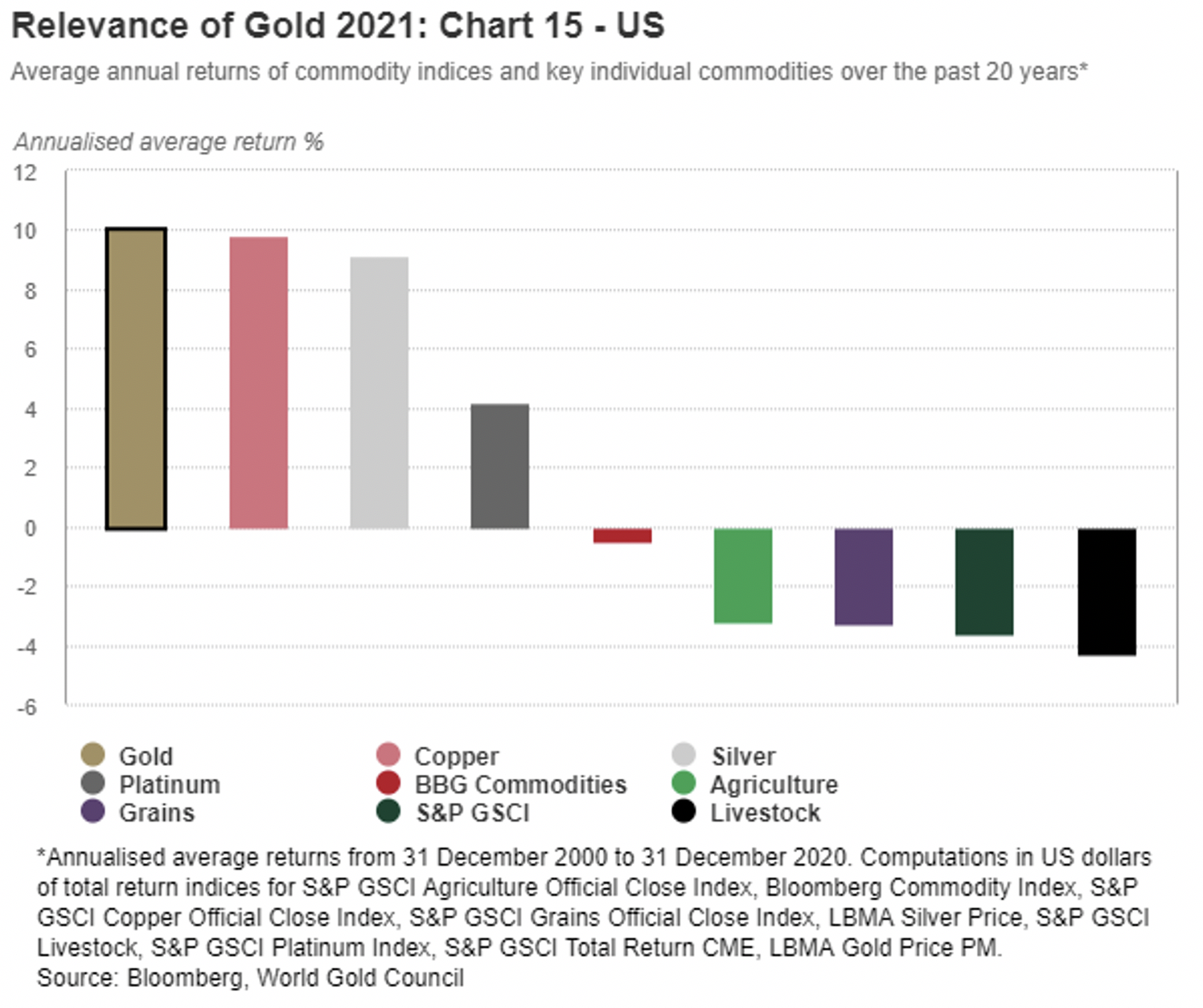 Perceptions of gold have changed significantly over the past two decades, reflecting the growing wealth in the East and a growing worldwide appreciation of gold within the institutional investment portfolio.

The unique properties of gold as a scarce, highly liquid and unrelated asset show that it can act as a diversifier in the long run. The position of gold as an investment and luxury commodity has allowed it to yield an average return of 11% comparable to stocks and more than bonds and commodities over the past 50 years.

The traditional role of gold as a safe-haven asset means it comes into its own in times of high risk. But the double appeal of gold as an investment and consumer good means that it can generate positive returns in good times. Reflecting ongoing political and economic uncertainty, persistently low interest rates, and economic concerns surrounding the stock and bond markets, this dynamic is likely to continue.

Overall, extensive analysis shows that adding between 2% and 10% gold to a US dollar-based portfolio can deliver a tangible improvement in performance and increase sustained, long-term risk-adjusted returns.