Silver has seen both bear and bull sides since my early days in this market back in 2004 being down this year to as low as $11 and change and as high as almost $30 this year, but keeping in context that it remains, at today’s range of $24, more than 50% below its all-time high of $52 reached in 1980; the best is yet to come!

This may be where silver (and to a great extent its big brother gold) fits comfortably into a well-diversified group of holdings or even as an insurance policy for what you have already amassed.

The difference between silver and gold of course being that silver remains the far more undervalued of the two metals by a country mile, despite the fact that it has actually averaged very well against gold. Let’s take a look at each metal since 2005. 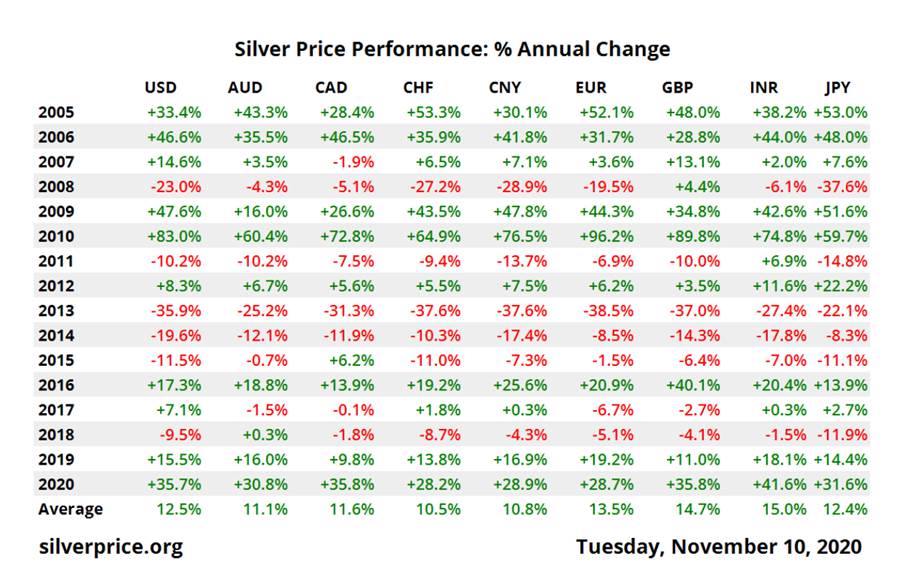 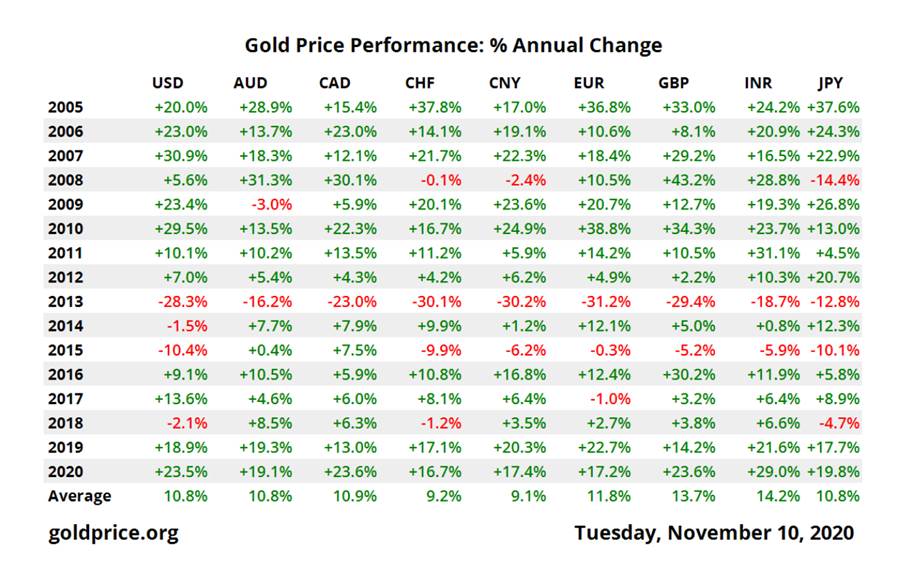 Look at the silver chart first. Yes, I would be the first to admit there is some red in that chart and that silver is not for everyone. However, it has managed (Currently at a 50% discount to its all-time high) to average over 11.5% in CDN dollars and over an astounding 12% in U.S. dollars per year since 2005. It is up over 30% in both currencies this year alone.

If you also consider the gold chart you will see they do have somewhat similar patterns. Gold has also been fantastic in terms of its yearly average in both CDN and U.S. dollars. It would also make and has made a fantastic anchor for many portoflios during this safe period between 2005-2020. However, the one significant difference is that it has increased much faster in percentage then its younger brother silver in the near-term.

While both metals seemingly looked very poised to move higher I believe silver, by percentage, will have the greatest surge moving forward as it plays the game of catchup with gold. (See below on Gold:Silver Ratio). 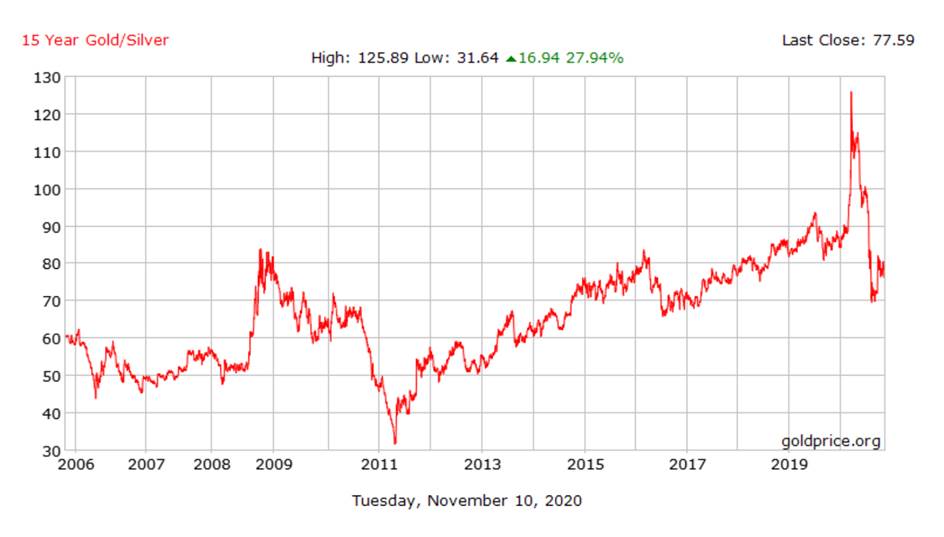 The real drivers of the metals markets are still intact… pandemic and resulting world recession, global banking stress, high sovereign debt, artificially low interest rates that have to rise eventually, the increasing possibility of another major crisis in any one of the major currency centers of the world, geo-political instability and long term inflation. All will remain long-term drivers of higher gold and silver prices.

Both gold and silver often outperform other hard assets during periods of significant monetary expansion (Gold surged over 2,000 percent in the 1970s, while silver managed to surge almost by the same percentage during the same period) because they have a relatively small fixed supply, are non-perishable, are liquid (as investments), easily storable, and historically recognized as alternatives to government-issued cash throughout the entire world.

Over the last decade, a time of dramatic monetary experimentation, silver has outperformed most hard assets (real estate, commodities– even gold) by a small margin, not to mention the stock and bond markets. It also surged during the inflationary 1960s and 1970s. However, all hard assets (houses, commodities, precious metals) have investment trade-offs, and silver’s risks are important to consider.

While gold is 8 times more scarce than silver (in terms of total ounces produced annually), its price is more than 77 times higher than silver. For the past 3,000 years in which the exchange rate could be observed, gold was 9 to 16 times more expensive, making today’s level historically extreme. Now that many of the factors distorting the ratio have disappeared, it seems logical that the market exchange rate between the two should begin to approximate the difference in scarcity of each metal, which points to silver being significantly undervalued at this point in time.

Like gold, silver is essentially the antithesis of stocks and bonds

Meaning it’s one of the few investment vehicles allowing a person to entirely remove wealth from the financial system. Traditional financial assets represent claims on other entities. To preserve their value, bonds require that a government or company make interest and principal payments; stocks require dividend payments and/or that management deliver on earnings expectations; derivatives of many kinds can require financial faith at multiple levels; and ultimately, the financial system itself relies on trust that world economic leaders will keep markets functioning properly by meeting their ever-expanding financial commitments.

Gold and silver, inert metals recognized for thousands of years as stores of wealth whose nature cannot be altered by human error, have value outside the financial system.

According to the International Monetary Fund, of the world’s potentially safe investment assets, 89 percent are bonds of some kind, that is to say someone else’s debt. For those believing that ultimate financial safety should not involve lending money to a company or government (buying a bond), there is only gold and silver, the other 11 percent. But given the scarcity of gold and other hard assets that are not economically sensitive (as real estate and major commodities are), silver is increasingly being regarded as a viable alternative to gold, which it was for most of human civilization.

In spite of present market conditions, these few points may help you as a reader to understand, beyond the headlines, the true intrinsic growing value of this precious and industrial metal that distinguish the metal from other investment options.

Silver has the highest price sensitivity to inflation of any commodity or sector in the stock market, by far. And it most certainly outperforms bonds when the price level is rising in the economy.

If you believe as I do that the world’s monetary authorities through careless spending and debt induced drunken binges are going to drive our world economies to the brink of extinction it makes sense to own some silver to diversify your investment portfolio (The right percentage to hold is something you should carefully consider with an investment advisor).

Timing any investment correctly is always a challenge, but silver’s price has fallen significantly in the last few months and is beginning to show tentative signs of taking off once again. If it should sit above $26 for any length of time it most certainly has a fairly clear path to $30 and above.